Will the Real Diet 'Craze' Please Stand Up?

Why Low-Carb Diets Are Not Pet Rocks

The implication is that sane people eschew fat in favor of carbs, consuming meals like fortified breakfast cereal and skim milk instead of bacon and eggs. Never mind that the fat soluble vitamins sprayed onto enriched cereal flakes will not be absorbed by the body in the absence of the dietary fat that was deliberately removed from the milk for "health" reasons. Or that the popularity of low-fat high-carb diets has led to the biggest epidemic of obesity and associated metabolic diseases since human beings started roaming the planet. 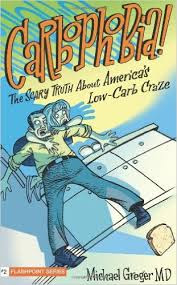 If you look at a timeline of human history, the relative millisecond in which the medical community has pushed carbohydrates over fat is the aberration from the norm. In reality, it is the low-fat high-carb diet that is the fad, a dietary experiment that has resulted in worsening health throughout most of the first world, which mistakenly followed the United States and its dietary guidelines like lemmings over a cliff.


It should be noted, however, that the United States -- the country that first promoted over-consumption of carbohydrates -- also produced the Kardashians and Donald Trump. As with these pop culture phenoms, it all boils down to money and image management. Medical and dietary groups in first world countries have been bribed encouraged by #BigFood companies like General Mills to redefine a balanced diet as obtaining half of one's calories from carbohydrates (a non-essential macro-nutrient) as a means to move product.

Despite the lack of any solid evidence (read Nina Teicholz's The Big Fat Surprise to learn more about the dearth of good science behind the U.S. Dietary Guidelines), skim milk and margarine were deemed healthy while bacon and butter became dietary devils.

The designers of the high-carb low-fat diet craze turned the tables against the standard American diet it replaced and acted as if humans had been feasting on fruits, grains and lean proteins all along. Using  textbook marketing techniques to confuse a public with limited memory, they labeled historic eating patterns as a craze when just the opposite was true.