Could corporate saboteurs be planting E. coli in your Sofritas burrito?

I do not believe the moon landing was a hoax filmed in a TV studio or that Pres. Barack Obama is a Muslim Manchurian candidate. But that doesn't mean I automatically reject all conspiracy theories, including the latest buzz about Chipotle Mexican Grill being targeted by biochemical companies like Monsanto for its advocacy of local, organic and non-GMO ingredients.

In fact, I had this suspicion several days before I saw the first articles suggesting this possibility because I know how Big Food/Soda/Agriculture/Chemical operate. In short, they accuse anyone who disagrees with them of being anti-science fearmongers while foisting industry-sponsored unscientific research on the public as fact and creating fear around not consuming their highly processed products and byproducts.

In the case of Chipotle, the fast food chain that boasts about its use of natural ingredients, the likelihood Big Ag and Big Chemical would take the bashing of their products sitting down were slim.

My suspicion about a possible conspiracy grew when I read an article last night in Natural News about some of the strains of E. coli found in Chipotle being genetically rare, a fact (i.e., not opinion) that was corroborated by such government sources as the FDA and CDC websites.

Reports of at least two disparate E. coli contaminations and several Norovirus incidents occurring so closely together -- a total of six separate events since July -- could be just a random coincidence. Or not. It could also be an organized attempt by adversaries of the second fastest growing fast food chain in the U.S. to discredit the company's highly publicized stance against genetically modified and chemicalized ingredients.

It didn't take long before the Internets were awash with "I told you so's" about needing to chemically wash and genetically alter foods to protect against foodborne illnesses. What may have looked like a fortuitous opportunity for the artificial food industry to blow its own horn could have been part of the overall campaign to first ruin the reputation of Chipotle and then convince the public that local, organic and non-GMO foods are really bad for you.

Was Chipotle too busy avoiding the fake dangers of GMOs to focus on actual food safety?
-- headline from Vox

-- headline from US News


It would not be the first time the processed food industry has banded together to chip away at Chipotle's growing popularity. The website Chubby Chipotle is backed by Big Food money hiding behind an innocuous sounding front group called The Center for Consumer Freedom.

Funny, but last time I checked, no one was kidnapping me in their Prius, driving me to Chipotle and forcing me to eat its food.

When I tweeted a link to the Chipotle conspiracy theory article from Natural News,  I should have expected a backlash based on the source. The website is a major target of so-called pro-science people who consider the site's founder Mike Adams of being an anti-science fearmonger.

Not surprisingly, I received such responses as

@Diet_Skeptic So when did "suspicious" come to mean "stupid as a stump?" (I guess it was about the time Mike Adams reached puberty.)
— Severian Jussaine (@TheSeverian) December 24, 2015

(At least @DebunkedByHaiku displayed some wit and did not rely on a Donald Trumpian style attack.)

As nutty as most conspiracy theories sound, it is naive to believe companies never practice criminal behavior to further their aims. Think Volkswagen and Enron as just two top-of-mind examples.

With GMO labeling a hot topic right now, it is neither lunacy nor irrationality to posit that shady forces could be behind Chipotle's recent spate of bad publicity.

Posted by Nancy Tracy at 12:38 PM No comments: Links to this post

I had no idea I was a fearmonger until I became ensnared in a bizarre Twitter thread with some rabid registered dietitians. 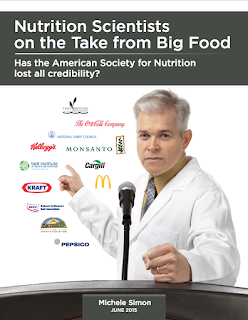 This was my first virtual excursion into the Food War, a global contest in which Big Food and its foot soldiers fiercely battle anyone who disputes their dietary dogma. Both sides claim to wear the mantel of science, like two football teams each convinced they are favored by a Higher Power.

What surprised me the most about the Food War was how many so-called health professionals still cling tightly to outdated, poorly designed studies to defend their dietary advice. I found myself in a minefield of research propaganda and pseudoscience funded by corporations increasingly threatened by mounting evidence that sugar- and highly processed carbohydrate-filled products are linked to obesity, Type 2 diabetes and other chronic health conditions.

It all  began when I questioned the credibility of registered dietitians while following the Tim Noakes hearing witch hunt in South Africa. This led to a corporate supermarket RD named Leah McGrath sending me an unsolicited list of tweeters who she claimed had "integrity" -- although they all support serving high-sugar flavored skimmed milk to school children. I tweeted something about some RDs being mouthpieces for Big Food and received an excited response back from McGrath asking me if mouthpiece meant the same thing as shill. It turned out she and her RD pals take perverse pride in being called a shill and highlight the occasion with the hashtag #shilltastic every time they are labeled such.

Yes, #shilltastic is a thing.

Then McGrath thought I'd be interested in reading an article tweeted by a dietetic intern named David Weinman who proclaims himself to be pro-science. The piece was typical Salon click bait about so-called sancti-mommies, a new breed of millennial females who pass harsh judgement on the health and safety of the foods other mothers feed their children. Why I'd be interested in this article escaped me since the Salon piece focused mainly on anti-vaccine and GMO politics, topics on which I had not even opined. Weinman asked me in a tweet if I was implying scientists would commit fraud and jeopardize their careers to shill for Big Food -- as if that possibility were as absurd as ponies sprouting pig tails.

For the first time I had an upfront and personal view on how Big Food's army of registered dietitians and wannabes co-opt the word "science" to discredit anyone who disagrees with their perspective.

Suddenly all of the news stories I'd been following made more sense:

** Professional dietitians funded by Kellogg's and other Big Food companies persecuting Dr. Tim Noakes and dietitian Jennifer Elliott for not accepting their dietary dogma as fact.

** "Scientists" ganging up against journalist and "Big Fat Surprise" author Nina Teicholz to discredit her editorial in the BMJ on the sketchy methodology of the USDA Dietary Guidelines Advisory Committee.

** The feds wiping egg off their face after reversing themselves on avoiding eating egg yolks, shellfish and other foods that contain dietary cholesterol, a warning which turned out to have scant scientific merit.

** Corporations like Monsanto and Coca Cola bribing academics to perform research that will make their products seem harmless and labeling conflicting research findings as pseudoscience.

(The Coca Cola story reported by New York Times investigative journalist Anahad O'Connor outed the company for bribing researchers to convince the public that sugary drinks can be part of a healthy diet as long as you exercise. Coca Cola VP Rhona Applebaum resigned over the scandal after emails published by the Associated Press revealed the academics were paid puppets and the bogus research network -- Global Energy Balance Network -- quickly disbanded citing "resources limitations.")

Though I am neither a scientist nor health care professional, I have a huge stake in who wins the Food War. I am Jane Q. Public, a surrogate for those whose hearts and minds both sides are attempting to control. In a few months, I will have a new grandchild who will be fed biased nutritional information at school and supplied with milk that contains more added sugar than should be consumed in a whole day.

My meandering journey into the low-carb high-fat way of eating has serendipitously led me to the sidelines of the Food War, and I think I may just stick around for a spell.


Posted by Nancy Tracy at 4:09 PM 2 comments: Links to this post