Low Carb Diet Restaurant Trick: How to Magically Turn Any Sandwich Into a Salad

I was never a big fan of Subway (even before the creepy Jared revelation), mostly because its meat seems to be a little on the mystery side. But one thing that restaurant chain does right is offer the option to turn any sandwich into a salad.

Ditto for Togo's, a west coast sandwichery known for über thick rolls stuffed with so much meat and vegetables you practically need pliers to get your mouth around them.

In my early Medifast/low-carb diet days, I would find myself looking longingly at a menu's sandwiches,  wishing some of them were salads instead. If none of the salads looked good, I would sometimes order a sandwich sans bread.

Until I got smart.

These days, I look at menus as mere suggestions, assuming any ingredients in a sandwich can be plopped atop romaine lettuce, spinach or other salad greens.

At work the other day, the in-house food vendor offered Philly Cheese Steak sandwiches as its Friday lunch special. I politely asked if I could have the sandwich as a salad and ended up with such a gorgeous looking meal a bunch of other people ordered it that way, too.

Many low-carbers are huge fans of protein burgers, which are bunless hamburgers wrapped in lettuce. I find these kind of awkward and messy to eat; so I even order my cheeseburgers as salads (or just eat with a knife and fork).

Of course, most restaurants do not mention the option to turn any sandwich into a salad. Bread and rolls are a lot cheaper than salad greens; so they offer only a limited number of salad choices.

But if a restaurant has lettuce and tomatoes in its kitchen, it should be able to accommodate your request. And you should be willing to pay a buck or two more if asked (although that has yet to happen to me).

To borrow a phrase from Taco Bell, "Think outside the bun." Then imagine which of your favorite sandwiches could become your favorite new salad.

Posted by Nancy Tracy at 10:24 AM No comments: Links to this post

So I'm on day three of my own personal science experiment to eat kimchi and roasted cauliflower "rice" for lunch every day.

Before the science police come to my house and handcuff me, I realize it's not a valid study since I'm not measuring anything and there is no control group. But I'm cool with collecting anecdotal data and hope to achieve a perceptible change in my overall health, energy levels and appearance.

At this point you may be wondering why I'm eating this weird combination of foods for lunch every day and what I hope to gain. And for that we need to start with kimchi, a Korean food staple as intrinsic to that country's cultural identity as the hot dog is to America's.

Since starting this blog, I have become a nutritional research hobbyist and recently noticed an increasing amount of literature on the importance of our microbiota. I did not even know I had something called a microbiota until a few months ago, but it turns out I have several in different parts of my body, including my mouth and skin.

The microbiota I'm going to focus on here is my gut microbiota -- the cluster of bacteria in my colon. (Biologists used to call this bacterial soup gut flora, but maybe they thought it sounded too much like something you'd find at a goth florist shop.)

Anyway, the factoid about gut microbiota that really hijacked my attention is that many scientists now consider this collection of bacteria a body organ, just like the heart. To me this revelation was as mind blowing as finding out Pluto was not a planet (although I think it may be re-instated. Could you please make up your mind already astronomers?)

I was equally amazed to learn we have ten times more bacterial cells in our body than human cells. So in some ways we are walking bacteria nesting in a human host, which is kind of creepy when you think about it

The bottom line is the adult gut contains thousands of different species of known bacteria that collectively weigh as much as the brain. And that's a $#!+load of bacteria!

The health connection to all this is that only one third of these bacteria is common to most people -- the other two thirds is peculiar to the individual. And its composition -- big surprise here -- is impacted by what we eat.

The reason it's so important that we have a good combination of gut bacteria is that our gut microbiota affects our health and mood in a major way. Everything from getting cancer to being depressed to gaining weight is affected by the health of our gut. There may even be a link to autism.

This recent New York Times article explains the mood association way better than I ever could; so I suggest you read it at least three times, along with this intriguing piece on the obesity link from Scientific American last year from which I will share this intriguing excerpt:


"New evidence indicates that gut bacteria alter the way we store fat, how we balance levels of glucose in the blood, and how we respond to hormones that make us feel hungry or full. The wrong mix of microbes, it seems, can help set the stage for obesity and diabetes from the moment of birth...."

So, I figured if I had an opportunity to improve my gut microbiota, one of the best ways I could do this was to eat more foods associated with good gut health. And when I did the research on this, one of the most popular suggestions always turns out to be fermented foods like kimchi.

I purchased my kimchi from the neighborhood health food store, which stocks a brand local to Sacramento called The Cultured Kitchen. For the caulirice, I hoarded stocked up on the pre-riced frozen organic cauliflower when Trader Joe's still carried it and roast it in the oven with some olive oil, salt, pepper and garlic. (You can also make your own caulirice from a real cauliflower using a Vitamix, box grater or most any food processor or blender.) 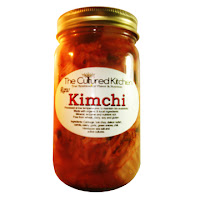 In addition, I am taking probiotics in tablet form and eat only yogurt that contains live cultures when I'm in the rare yogurt mood.

Whether my gut flora will now bloom -- or whether I will even notice -- is hard to predict. But as my dear departed Grandma might have said, "It can't hurt."

Posted by Nancy Tracy at 10:44 AM No comments: Links to this post

So you don't get to be more than a hundred pounds overweight without eating a few more doughnuts or cheeseburgers than you should. But does that mean it's okay for Jimmy Kimmel to joke that the White House chef is worried Chris Christie will turn the presidential mansion into a White Castle?

Or that the New Jersey governor should select a running mate who is 600 pounds so he'll look thin in comparison?

Or that he's not fit for the Oval Office ... unless they widen the door?

While these monologue fillers may elicit a mild chuckle, are they really funny? And how do they affect people who are overweight and struggle just to get through the day?

Recently Jerry Seinfeld said he refuses to play college campuses any more because young people are so politically correct you can't make a joke without offending them. Our society in general has become so prickly and sensitive it's practically impossible to make a jab about any group without hurting someone's feelings.

That said, certain groups are off limits -- unless you are a member of that group. Which means gays can make jokes about gays, Latinos about Latinos, blondes about blondes, etc.

Maybe Kimmel's jokes would be funnier if he were fat like Christie because he'd be poking fun at himself at the same time. It's okay to laugh with someone -- not so much at someone.

If I were morbidly obese and had to hear fat jokes night after night, it would probably make me feel worse about myself. Which would make me depressed and less likely to take action to change my situation.

I would also be subject to discrimination by people who judge others based on their weight.

Still, it's not a comedian's job to make society fair or increase the self-esteem of people who don't fit a socially ideal mold. Whether in good taste or not, comedians like Jimmy Kimmel will continue making jokes about Chris Christie and other outliers when the audience stops laughing.


Posted by Nancy Tracy at 11:25 AM No comments: Links to this post